The stone cupola atop the tower at St Peter’s houses a Chime of eight tubular bells. 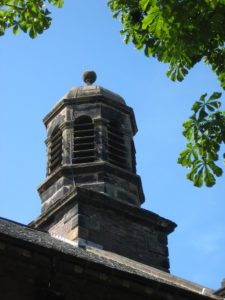 Tubular bells were introduced into the UK in the mid 19th century and 200 or so sets were made in England.

Cast from similar metal to that of church bells, tubular bells produce a noble sound. An octave tuned to the diatonic scale can ring out a useful number of melodies. An extra two bells (or more) are sometimes added as they greatly increase the number of tunes. “Change ringing” (for the mathematically inclined!) is also possible.

Until recently the bells at St Peters were rung manually using ropes terminated on an Ellacombe frame (invented in 1821 by Rev H T Ellacombe of Gloucester) to enable the Chime to be rung by one person.

In post-war issues of St Peter’s Parish Magazines you can find the monthly bell-ringing rota. Players reached the Ringing Room above the stair well in the tower through a trap-door at the top of a narrow staircase.

In 2010 the mechanism was replaced by an electrically driven system.